This is the time of year when the majority of Americans will spend their winter celebrating Christmas, a date they believe was the birth of Baby Jesus, who they believe is the savior of the world. That story, of course, is most probably complete bollocks.

Here’s my secularist agenda for the War on Christmas. 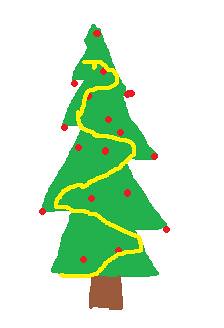 What is this young secularist going to do when her peers say “Merry Christmas” to her? Is she going to bite their legs off? Is she going to sneak into front yards and dismantle people’s nativity scenes? Drone Christmas carolers out by blasting Atheist rap music? Sneak into people’s houses at night and steal all their presents and their last can of Who-hash?

No, none of that.

Want to put a nativity scene in your front yard? Wonderful. I might snort ocassionally as I walk by, but I won’t touch it. I won’t dismantle it, or demand that you’ll also have to put in a menorah and a festivus pole with it to avoid offending Jews or Seinfeld addicts.

And Christmas carols? I play them on the piano this time of year, and I catch myself unconsciously humming or whistling familiar tunes at all times of the year anyway (I also really love the tunes from Gimme That Old Time Religion and Were You There When They Crucified My Lord even though I don’t care much for the lyrics).

I love Christmas decorations of all sorts, and I have no problem with any sort of building having secular decorations such as lights, and snowflakes, and stuff.

But, these decorations often include a nativity scene. This, needless to say, is not secular, and yet many state buildings (and apparently the occasional public school) will have an overtly religious display.

As I’ve already said, I have no problem whatsoever if you want to put a gigantinormous nativity scence in your front yard that can be seen from space.

If you’re going to put one religious decoration on the city and county building you have to allow displays from all religions. This becomes a problem when you consider just how many religions have holidays this time of the year (the Winter Solstice, Christmas, Hannukah, Diwali, Yalda, Festivus, Human Light Festival, etc).

When a few Atheists put up a sign in the state building of Olympia, Washington next to a nativity scene people get fussy about it, but I have no problem with the nativity scene as long as they’re willing those who want to include their own displays.

The FFRF sign placed in Olympia, Washington as well as Illionis.

What would really cheer me up, though, would be an undecorated Festivus pole.

So, say “Merry Christmas” to me, sing me a carol, put a prominent nativity scene on your front lawn, whatever. But, the state doesn’t get to endorse a religious holiday any more than it gets to force kids to pray in schools. And that’s my evil secularist plan for Christmas when I become empress. I’m not stopping anyone from trying to keep their “Christ” in “Christmas” or their “fest” in “Festivus”.

Enjoy whatever it is you’ll be celebrating, and if you won’t be celebrating anything enjoy watching the downy clumps of snow fall and spending time out of school with your family.