Okay, to start off I have a small confession. Even after writing my post about Twilight in which I said that I didn’t like it, I bought a thingy of merchandise. Remember that picture of the rings I had in my last post? You know, the ones that had the words “I dream about being with you forever” on the inside of the box? And that had “lion” and “lamb” written on them? I just found it so amusing that I had to buy them. I have them with me as I write this post. Hot Topic is now sold out of them so it’s a good thing that I went to the store to get them when I did.

They also have some other… interesting bits of merchandise. For example, the Edward Body Shimmer. Now YOU can sparkle just like Edward! To quote a teen blogging 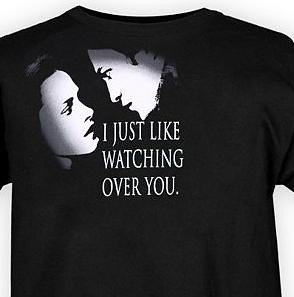 That’s so fail that it was win for a second and then became a fail again with the remainder.

I also offered MasalaSkeptic the “Twilight Watching You T-Shirt” after a friend linked me to it.

Anyway… Here are my teaparty questions that are based on Twilight merchandise.

Does it go against my principles of rationality to, one day, say that I really dislike Twilight, and then to rush to the mall the next day to buy merchandise?

Is sparkliness in vampires an evolutionary adaptation favoured by natural selection or sexual selection? Or is it neither and probably just that it hasn’t been selected against because it’s not detrimental to the survival of vampires?

Even if it were firmly established that Twilight was a book about stalkers would there be any point in parents not letting their kids read it? Can any harm really come from works of fiction in that sense? Under what circumstances would you seriously consider banning a book?

Given the fact that this is the most entirely insane philosophical teaparty so far do I deserve to continue posting on Teen Skepchick?

Twilight, Lolita, and "HE LOVES HER!"

The College Search: Choosing Your School