FaithandEvolution.org seems like a harmless domain name. We evolutionists do have our members of faith in our ranks, like it or not. It has generally been the policy of those of us who support science education to allow the theistic evolutionists to join us in fighting creationist tactics of getting Genesis or the relabelled “intelligent design theory” taught in schools. But what’s really going on here on this website?

Let’s do some poking around, shall we?

When one first visits FaithandEvolution.org, one is greeted by an automatically playing video, first with a bunch of people on the street saying that they believe that humans evolved from apes. Note that every one of them gives an answer saying they accept evolutionary theory, but, one must ask, in a country where just under 40% of the population say they believe in evolution, why go through the lengths to give such a biased sample of opinions in favour of evolution?

Suspicions increase when familiar names and talking heads appear saying “I don’t know how to explain this biological process, therefore there was a designer,” (I leave it up to the reader to spot the logical fallacy) and one just has to click on the “About” page.

The video that plays automatically on this page says:

According to noted biologist Richard Dawkins, Darwinian evolution makes it possible to become an intellectually fulfilled atheist. According to Francis Collins, former head of the Human Genome Project, evolution is perfectly compatible with his Christian faith.

Well that sounds just like they’re only concerned about the compatability of faith and evolution in the way theistic evolutionists are. Not a question of the validity of intelligent design, right?

This site was developed by the Center for Science and Culture at Discovery Institute.

So what’s going on here? It would appear that the Discovery Institute is trying to narrow the gap between intelligent design and evolution by trying to equate intelligent design with the theistic evolution subscribed to by somewhat more sensible scientists so that they can claim them as one of their own. “See?! We’re evolutionists too!”

As has been said before, it would appear that the creationists just keep evolving. I provide the following cladogram showing their phylogenetic history: 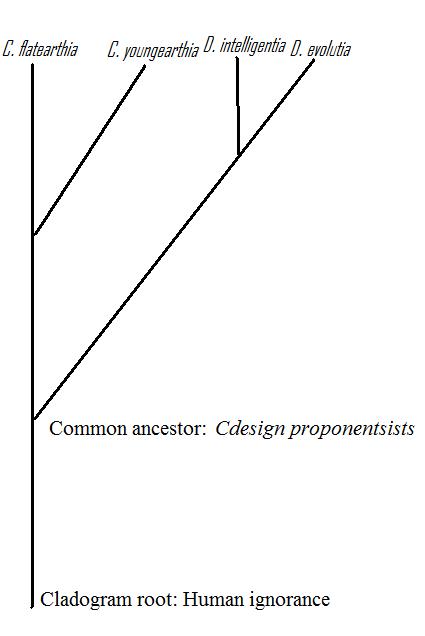 Here we can see the narrow but not too far distant separation between the two members of the “Creationista” genus, flat earthers and young earthers. In another clade, we have Designista intelligentia which thrives in habitats where human minds have little means of filtering its fountain of logical fallacies, and Designista evolutia which has the survival advantage of Batesian mimicry of the colours of Evolutionista theistica in the hopes that they will be ignored by Evolutionista materialistica, which preys on members of Creationista and Designista.

Dear Discovery Institute, if you think posing as theistic evolutionists will keep you safe just because we like to have Francis Collins and Ken Miller around (Ken Miller has pretty eyes, by the way), think again.

Update: Oh, and apparently there’s a post about this too at Homologous Legs. This is what happens when you stay out of the blogosphere this long to finish AP exams.

Scientific American: No, no, no...