When I was little I used to love Cartoon Network. I loved to watch Dragonball Z and Ed Edd and Eddy, Dexter’s Laboratory, and Batman Beyond. You know, the good old days when CN was made up of cartoons and not this junk!

The Othersiders are a group of “friends” who investigate spooky looking places and attempt to find “evidence.” Friends who answered a casting call…

Elles and I decided that we should form a group called The Thissiders and hunt ghost hunters. So we watched the first four episodes, collected our evidence and now we are ready for the hunt!

First let me introduce you to The Team (of deluded, scripted characters)!

(The following is a critique of the characters portrayed in the show. The actual actors in my opinion are being taken advantage of and should not be blamed.) 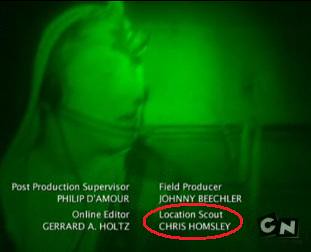 KC is 16 and the team’s case manager. KC said her job includes deciding on the places they “investigate.” However, Elles found out that they already have a location scout that does that. So KC’s job is basically useless.

Riley is the team leader and he decides whether or not the team collects enough evidence to determine whether or not a place is haunted. While watching the show I heard Riley say “when going on an investigation we are just looking for the truth and it will do whatever it takes.” He considers himself the “skeptic” of the group. He has said some pretty intelligent things at the end of the third episode called Mojave Bone Yard, but other than that visual pareidolia always seems to fool him.

Zach deals with the tech stuff. You know like flash lights, inferred cameras, EMP readers and don’t forget the voice recorders. Even though Zack is the tech support, he fails to understand that cameras have a flash.

Not only is this show promoting mystical thinking towards adolescence, but it gives kids the wrong idea about science. The characters on the show throw terms like “truth” and “evidence” around with no understanding of what they are.

The team does a lot of wandering around, and a lot of talking about how spooked out they are, but not a lot of investigating. In the second episode when they think they hear paranormal activity, the pair in question immediately says “let’s get out of here” instead of “let’s try and figure out what that really was”. Their version of the scientific method, which was carefully analyzed by Elles, appears to be the following:

Despite their unenthusiasm for rigorous examination of evidence, the team has already voted that three of the four locations visited are haunted. But is it truly the case that their evidence is explained only by spirits of the dead?

My esteemed colleague Elles and I will continue to advocate for logic and reason. Keep checking back over the next few days for a series of posts entitled “Thissiders” dealing with separate aspects of the show, or individual bits of evidence, where the failings of the Othersiders are in stark contrast with true science.