Today, July 16, 2009, is the 40th anniversary of the Apollo 11 launch. This was the mission that landed three men – Neil Armstrong, Michael Collins, and Buzz Aldrin – on the moon for the first time. 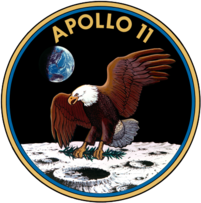 I don’t know about you guys, but seeing pictures of the mission gives me the chills. And although going to space and the moon is a normal thought these days, it still blows my mind to think about it.

You can follow the entire mission (lasting 8 days) on this interative website. There are photo and video galleries as well as a radio broadcast the whole way to the moon and a countdown to the landing.

For more pictures you can go here. Under these photos are more links including the wikipedia article.

The mission ended on July 24th, which, coincidentally, is when I will be leaving for vacation to Puerto Rico, where I will be visiting the Arecibo Observatory. (More on that in a later post)