Star Trek to Stargate: Minority Representation and the Challenging of Social Issues

I’ve never really made it a secret that I’m a huge fan of all things science fiction. This is of course because of the SCIENCE! and also because science fiction writers usually have the guts to take on tough social issues. 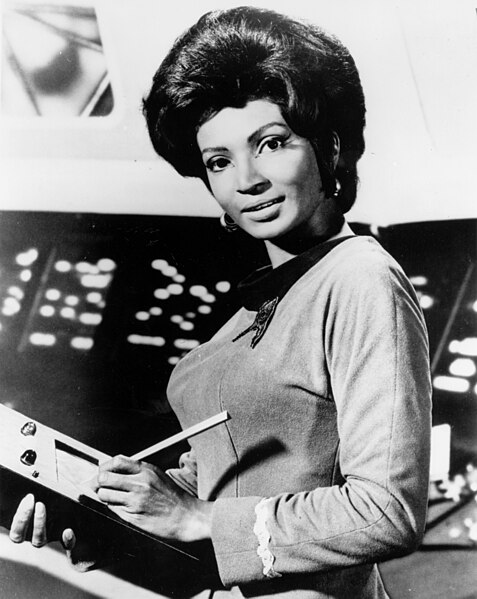 Lieutenant Uhura in the original series of Star Trek

The original series of Star Trek ran during the 1960’s, a time when misogyny and racism was still quite prevalent, but they had episodes which spoke out against fighting over skin color and excluding women. The writers consciously chose to have one of the regular characters, Lieutenant Uhura, the communications officer, be a black woman to show that you could be black, a woman, and be on the bridge of a starship opening up subspace communications channels to Starfleet Command.

For the most part today, our issues with racism and misogyny have lessened up a little, but there are still under and misrepresented minorities out there in our society who get persecuted. What about the gay, lesbian, transgendered, and bisexual who are still looked upon as “abnormal” “unnatural” or “ungodly”? Or the 18% of the American population with disabilities?

It’s recently been released that one of the new science fiction TV shows I’m looking forward to, Stargate Universe, will have a regular lesbian character, and there’s also an episode in the works with a brilliant scientist who happens to be quadriplegic.

The fans have reacted to the news with hostility, two months before the show has even aired. Are any of these criticisms really deserved?

A few sample comments from the GateWorld article on the lesbian character:

I find this desgusting. I don’t hate gays, just their practice and way of life. I was incredibly exited about SGU, but now, I doubt anyone in my family will watch it.

So you don’t hate them, but you won’t watch a TV show even though there is no evidence to suggest that you’ll be subjected to soft-core lesbian sex, and therefore won’t be subjected to viewing their way of life? What exactly is it that you’re afraid of? Having your mind opened to accepting that there are people that live alternative lifestyles to yours? What do you do if you hate fish and chips but your next-door neighbors eat fish and chips every night for dinner?

“I don’t hate my neighbors, just their practice and way of life. I was incredibly excited about them moving in next-door, but now I guess we’ll have to not talk to them because I can’t bear the thought of them with their battered fillets and fried potatoes.”

I’m sorry but you can’t be all things to all people, and I’m sick of this attitude.

According to the United State Census, 12.8% of Americans are black. The statistics on percentage of gays has always been something of questionable accuracy, but Alfred Kinsey found it to be around 10% of men. Might I point out that Stargate Universe has a black character and that they probably did it because they were going for uniformish representation of the population? So if you can be okay with people purposefully putting black people on TV, you can be okay with people purposefully putting gay people on TV.

Yeah, the merits of minority representation on TV are debatable. I personally found it helpful to be exposed to a plethora of women scientists as a little girl growing up watching Star Trek… but the thing I’m getting at here is to not be a hypocrite. I’d love to see this commenter say “I can’t believe they’re catering to the black audience as they only make up a small percentage of the population. You can’t make everyone happy.”

From the same commenter:

They do realize that with this news that Universe is gonna take a huge dip in ratings when it airs, right? Do they realize that there are quite a number of religious people (Christians or otherwise) who watch universe who are going to be offended when they see the constant pushing of the homosexual agenda on Universe? I know a pastor who watches Stargate avidly, I highly doubt he’ll get into Universe now that it features gay characters.

I was looking forward to Universe until this.

Given the fact that Stargate: SG-1 was a TV show where practically every week they went to a planet to find an enslaved population of humans working for an alien that they thought was a god, and that the team from Earth that went to the planet would usually do everything in their power to convince the people that the alien they were working for was a false god, and that the plot of the whole ten years of the show usually rested on trying to kill some evil race of aliens that wanted us to worship them as gods, I’m consistently surprised by the number of religious people who watch the show, yes.

But who cares? There were loads of racists who were avid television viewers that probably threw the remote across the room when Star Trek came on in the 60’s. Loads of misogynists who gave dismissive grunts and switched the channel whenever Spock praised Uhura’s abilities as an officer. They may or may not have had religious justifications for these prejudices, but when you say “religious people” in your comment that doesn’t change the fact that they still are people with prejudices and it’s no more respectable to cater to their desires because they’re “religious”.

In the other article, the one about the quadriplegic woman, the main objections were that they had referred to her as “physically uselesss” and incapable of “intimacy” (I think they mean sex). You know, insensitivity is probably a fair point, but whatever. What I’m more concerned about is…

Doctor Eleanor Perry, is a brilliant scientist at the top of her field, who also happens to be a quadriplegic.

Forget insensitive language, disabled rights activists really ought to be commending the makers of SGU. Why do I say that? The general stigma about disabled people is that they are a drain on society, or that they can’t make any genuine contributions. Representing a disabled person on the show who is a brilliant scientist shows the exact opposite of that.

So what do we have here?

If you don’t have a problem with Star Trek‘s strong, intelligent black woman, you should have no problem with this.

So I personally applaud the makers of Stargate, and though I may have a doubt or two about the show, I will be watching it on October 2 when it comes out with a big bowl of blue Jell-O! in my hands.

My 23 Minutes In Hell