My 23 Minutes In Hell 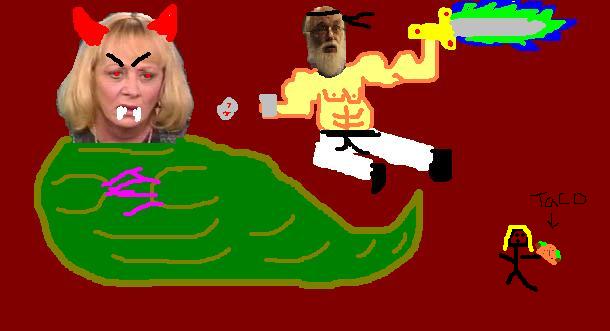 A few weeks ago, I was in an airport (preparing to fly to TAM 7!) when I saw a book called 23 Minutes in Hell by Bill Wiese. The book was about Bill’s twenty-three minutes in hell and how he was sent there by God to witness its horror and warn us. So Bill wrote a book and made lots of money. After looking carefully at the book, a few thoughts crossed my mind. The first thought was, why only twenty-three minutes? Why not twenty-five or thirty? And why doesn’t the big bad deity come down and show us his wrath first hand? After I had lost interest in those thoughts, another thought crossed into the evil and maniacal portion of my mind. Can I publish my delusions and make money? 👿 Yes, I do believe I can. So I decided to do what Bill did and I went into my head to visit hell myself. This is my 23 Minutes in Hell:

I found myself at the gates of heaven. They were huge, shiny and covered with tacos, which let me know that I was indeed, in heaven. I walked through taking a bite out of the handle to the gate. No sooner had I done that a giant orb approached me. It didn’t really have a face or anything but somehow I knew it did not like me. As soon as it was close enough it spoke, “Cassie! Welcome! Would you like to see where your feminist skeptical ass is going after you die?” I winked at the Thing and replied with a mouth full of taco “sure.” The Being spoke again, “I am now going to modify your psyche so that you can handle agonizing pain without going insane. I am also going to make you indestructible.” It then modified my body so that the torture that I was about to endure did not destroy my physical appearance. I found out It did this to all It’s victims so they can feel their well deserved torture for eternity. The Being spoke for the final time, “Now Cassie, witness what has and will become of every rational mind in existence.” The angry godlike creature then casually tossed me down a nearby hole cleverly labeled “Hell.”

I giggled like an idiot as I fell. In what direction was I falling? Who knows? But as I got closer and closer to my inevitable destination, it got warmer. Flames engulfed me as I hit the ground. Pain shot through every part of my body. Thankful for the modifications that the creature gave me, I stood and looked around. Hell looked like… well… hell. Flames, demons, people screaming their heads off. Lost in all the pain and confusion I barely managed to witness two demons approaching me. I saw that one was male and one was female. The male looked a lot like Peter Popoff and the female looked like Jenny McCarthy. Then I realized that they were, in fact, Jenny McCarthy and Peter Popoff! They then started to talk to me and my ears started to bleed. The amount of agony and pain their voices caused was indescribable. Finally they distracted themselves with one another and began talking about returning to Earth. I saw my chance and ran, thankfully they didn’t chase me. I ran until I found a house covered with unicorns, as I approached it I saw a sign on the door. It read: “Reserved for the Skepchicks.” So I walked in. Inside I witnessed horrors that no human could ever dream of. The entire bottom floor was a kitchen. There were cleaning and cooking supplies everywhere. Books of the skeptical and intellectual persuasion were burning on the walls! Blinded by the sexism, I stumbled upstairs. The second floor of the house was a giant bedroom with guys who could only say the phrase “you have beautiful eyes.” They said it over and over again. I knew I needed to get out of here so I went back downstairs, my mind on escape. As I was running back downstairs I ran into someone. To my horror I saw Marie Curie in an apron, pregnant and barefoot. She was also accompanied by Alice Paul and Hypatia of Alexandria, both of them pregnant, barefoot and wearing aprons. I lost all composure, I left the house screaming.

I screamed and ran until I ran into a Demon the size of a large bus. It looked like a mixture of Jabba the Hut and Sylvia Brown. She was eating from a bowl full of what looked like humans. It was then that I noticed that there was a word on the bowl. It read “skeptics.” I watched, unable to turn away as her long fingernails poked and prodded through the bowl until she stabbed a human. She then pulled her hand out of the bowl, revealing a skeptic skewered on her long fingernail. Screaming the poor skeptic disappeared into the demon’s mouth. She then chewed, slowly. I was frozen with terror. The demon noticed me and began to slither towards me, still clutching the bowl of skeptics. I stared at the disgusting mass moving towards me, I was petrified and really wanted another taco. All of a sudden out of nowhere, The Amazing Randi flew at the demon. In his hand was a flaming sword in the other hand a deck of razor sharp cards. While flinging the cards at the demon, Randi yelled, “Cassie, get out of here, and when you do keep spreading skepticism and critical thinking skills. It is the only way we can defeat them!”

And exactly twenty-three minutes after I was flung down to hell, I awoke on the plane. My dad was looking at me with concern, which he does from time to time. He asked if I was alright, he then said I was saying foul things to a guy named Peter. I told him I was fine. And then with a smile I told him that I must preach the good Word of skepticism so Sylvia Brown will not eat me! My father just stared at me, and then went back to reading a book. I pulled out my laptop and began writing my account of my time spent in hell.

Star Trek to Stargate: Minority Representation and the Challenging of Social Issues