When the Earth Shakes 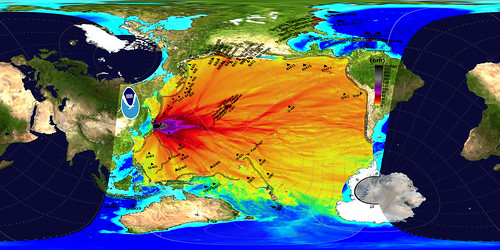 Edit: This image can be found here.

Just two weeks ago, my homestay sisters in Japan were frantically facebooking and emailing me to make sure I was okay after the massive earthquake in Christchurch- not so far from where I live. Today, all of that is reversed as I desperately try and get in touch with them after the 8.9 earthquake in Japan that triggered a tsunami set to affect the entire Pacific region.

But in between all of the shocking images, and ever-rising incomprehensible death tolls in media coverage of the event, I keep coming across this “SuperMoon” rubbish.

Mindy already mentioned Ken Ring last week in her Teen Skepchick’s Reality Checks. If you want to read more about that, they did some really good coverage over at sciblogs.co.nz here and here.

So what is all of this Supermoon stuff about? And why do people think that it is related to seismic activity?
The Supermoon is set to happen on March 19th. The moon will pass by earth at its closest orbit, closer than it has been in the last 18 years, and in addition to that, it will be a full moon. Astrologers have claimed that this will cause extreme stress on the earth and earthquakes, volcanoes, storms and other natural disasters will cause havoc. So Japan just had a big earthquake right? They must be related! Not quite. For a start, it is still a week until March 19th when the moon will be full. In fact, the earthquake happened exactly in between the full and new moons, at a time when the force the moon exerts on earth is at its weakest.

Plus, there is little more than a very weak correlation between the moon and natural disasters anyway. The only thing that the supermoon next week is going to cause is a slightly higher than usual, or lower than usual tide around the time of the event. The earth builds up huge amounts of energy over hundreds of years, and releases that energy when the build-up gets too great. The fact that a huge earthquake occurred just a week before this rare astronomical phenomenon is a very tragic coincidence.

If you want to read the real science, Skepchick has it covered with an absolutely fascinating post by Evelyn. She even has suggestions for how you can help.

Lauren is a Maths and Physics student from somewhere in the southern hemisphere. She has an affinity for reality, and you can find her on twitter @lolrj, or Google+.