Why I Won’t Be Trying Homeopathy

I’ve suffered from pretty severe eczema my whole life. In the past year, things have been worse than ever– I’ve had days where I undress to find the insides of my clothes nearly white with flaked skin, I regularly scratch myself til I bleed, and I’ve managed to accumulate a small personal pharmacy of pills and potions.

I absolutely loathe everything about it. I loathe the way it looks, I loathe the constant itch, I loathe waking myself up in the middle of the night by scratching, and I loathe that it sometimes prevents me from exercising and socialising. I loathe that every time I go to the doctor, they give me the oh-so-helpful piece of advice “Try not to scratch” (Well, duh, really?)

I’d LOVE for there to be a cure for eczema. But there isn’t, so I just have to persist with my creams and ointments, learn to know what the signs are for when things are about to flare up, and try my best to keep things under control.

Enter my first-cousin-once-removed (you totally needed that detail for this story to make sense), who just today decides to tell me about how awesome Homeopathy is. How much it has helped him! How I should try it! How these doctors and dermatologists I am seeing are treating the symptoms and not the cause! Big Pharma is paying them, and they wouldn’t make any money if they cured your eczema!

I am left awkwardly going “Um, well, I do not think that Homeopathy has stood up in proper double-blinded medical trials. All of the trials that seem to show it works fall down when you look closely at their methodology. I think any positive effect that it has had is just placebo. Homeopathy just doesn’t make any physical or chemical sense. It is just water.”

I could kind of see what he was driving at with this point, but:

I haven’t and I don’t plan to.

It’s hard, right? Sometimes it is all well and good for Skeptics to put out the right information, but if you have a doctor saying (rather impersonally) “Sorry, no cure just yet, you will just have to persist with all of these medications I am going to prescribe.” and some other dude saying “I can help you! Look at all of these other people with horrible afflictions who I have helped!”, well, who do you want to listen to?

And you know, what do you really have to lose by just giving it a try?

Well, um, time and money, for one. I’m a poor student, and I spend enough money on medication as it is thankyouverymuch. I want to know what I am buying, and see if it works before I buy it. I want to be an informed consumer and all. I wouldn’t go out and buy a car without first checking a few things out, so why wouldn’t I check out the stuff I’m putting into my body? More than that, you can see what’s the harm?, for all of the harm done by homeopathy (and colloidal silver— another one I get peddled quite regularly)

I’m not closed-minded for not giving it a try. I’d be closed-minded if I went “That sounds like nonsense!” and then continued to say that without checking the evidence. But as the ever-wonderful Mr. Tim Minchin puts it in Storm:

“If you show me
That, say, homeopathy works,
Then I will change my mind
I’ll spin on a f**king dime
I’ll be embarrassed as hell,
But I will run through the streets yelling
It’s a miracle! Take physics and bin it!
Water has memory!
And while it’s memory of a long lost drop of onion juice is Infinite
It somehow forgets all the poo it’s had in it!

You show me that it works and how it works
And when I’ve recovered from the shock
I will take a compass and carve Fancy That on the side of my c**k.”

(Of course I have a vested interest in not binning physics just yet, considering I plan on having a career in it, but whatever! Physics works and is much better and more interesting than Homeopathy.)

So, no. I won’t be trying Homeopathy until such a time as the homeopaths come up with a product that works. Modern medicine might not have a cure, and they might never have a cure, but they have an awful lot of things that have helped me considerably. And they change as new evidence comes to light, too– it is not uncommon to go back for a repeat on a script and have a doctor go “Oops, we don’t prescribe this anymore, try this it is much better”. So I shall continue to put stock in science-based medicine, and remain ever-skeptical of homeopaths.

Of course, Randall of xkcd has said this so much more eloquently and succinctly than me already: 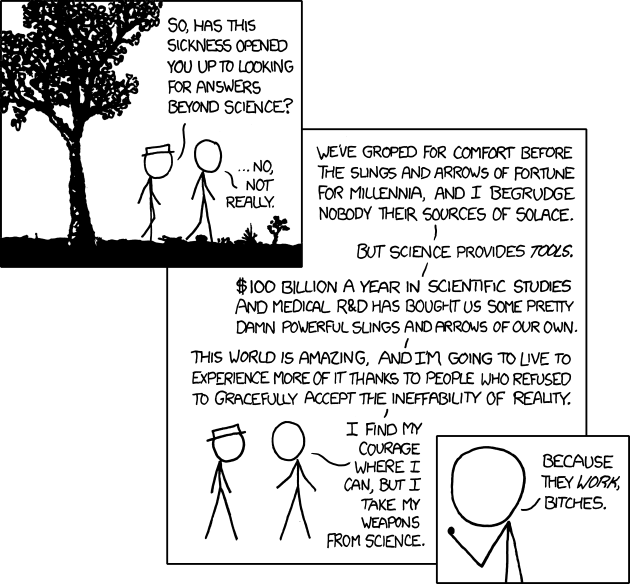 Lauren is a Maths and Physics student from somewhere in the southern hemisphere. She has an affinity for reality, and you can find her on twitter @lolrj, or Google+.

Medical Mondays: Curing a Bloody Nose in the Medieval Ages

Quackery and Preying on Vulnerable People