I don’t want to cause any contention with this post but I have a little bone to pick with the theism/atheism discussion, in particular a certain belief that the terms are black and white, that there is no in between, even to the point of some advocates of this position expressing disappointment that people (eg. some of the cast of the skeptic’s guide to the universe) self-identify as agnostics. Now I have a problem with passing judgement on people for the label they choose just on principle, but I also want to address a different position I would consider ‘agnostic’, one that doesn’t match up to the SGU panelists but one that the word ‘agnostic’ describes, I think, in a way that no other does aptly. It’s not atheism, it’s not theism, it’s a different beast that lies somewhere in the middle, and having gone through all three of those stages I will raise my shield against a barrage of raised eyebrows to defend the right of ‘agnostic’ to exist as a term.

Right, are you still here? Good, is God? If your answer is ‘I’m not sure’ then perhaps you’re not a theist or an atheist, perhaps you belong to a circle of belief that some refer to as ‘agnosticism. 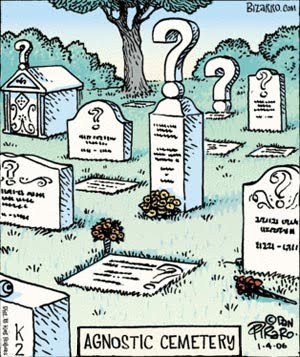 The problem I think, with trying to refer to this position of not believing or disbelieving in a God as agnosticism is the origin of the word itself, one that is strongly associated with Darwin’s bulldog and everyone’s second favorite biologist, Thomas Henry Huxley. Pulling a quote of his from Wikipedia, you can tell that T.H. Huxley’s agnosticism falls into the definition most often thrown around in skeptical circles, and one that has been criticized by several high-profile atheists as falling under the banner of atheism, and therefore not requiring a separate term to describe it:

‘I neither affirm nor deny the immortality of man. I see no reason for believing it, but, on the other hand, I have no means of disproving it. I have no a priori objections to the doctrine. No man who has to deal daily and hourly with nature can trouble himself about a priori difficulties. Give me such evidence as would justify me in believing in anything else, and I will believe that. Why should I not? It is not half so wonderful as the conservation of force or the indestructibility of matter…’

Personally I like this definition as far as it goes, it explains the importance of evidence for the pursuit of truth, we can never objectively know whether there is (or is not) a deity and therefore a scientific view 0f knowledge is agnostic in respect to the existence of a non-interfering deity.

However, it is true that the views of many atheists are in line with this definition of the term, and despite the connotations of the term ‘atheist’ and the public perception of someone who identifies as such, it  could be argued that according to this definition, agnostics fall under the black and white system of theist/atheist, with n0 belief in a deity they are not theists and are therefore, by definition, atheists.

But there’s another use of the term which I believe is more commonly used outside of skeptical circles and it is one that is often overlooked by intelligent people; perhaps because it does not fit the definition adopted by T.H. Huxley and other high profile nonbelievers, perhaps because it doesn’t cross peoples’ minds, but whatever the case there are people around that simply do not believe in one side more than the other.

I realise that talking about my own experience like this gives off that unreliable mist of anecdotes but I was in this phase for a number of months, in equal parts believing there was a God and there wasn’t, unable to decide either way I would not have identified as a theist or an atheist, and rightly so, because theism/atheism is about belief/lack of belief, and where that slash lies is a category that people can, and do fall into. I don’t know how many people have genuinely gone through this phase but I’m sure I’m not alone, and the fact that so many people insist on the false dichotomy that we have to be either theist or atheist bugs me on a personal level for this reason. some people say ignorance is bliss, but I don’t agree. It’s difficult to be stuck between two points, not knowing which way you fall and which group you’re going to offend at the other side, and to have people insist that you must either believe or not just adds salt to the wound. If you believe that there is a God as strongly as you disbelieve it, surely you are no theist and no atheist. Insisting on a black and white position at that point then is pointless, and more than that, it’s counter productive, because by examining another position, well, you might just learn something new.

How We Use Anger In Activism

The ‘Schism’ in Skepticism