Olympics: EPO & The Science Of Doping

So before the Olympics come to what I’m sure will be  a breathtakingly eyebrow-raising conclusion (if Great Britain’s quirky opening ceremony was anything to go by) we should reflect on some, of the issues  (or rather, one big issue) that these games raise outside the world of sport. I admit as a non-sports fan, that I’m actually really enjoying the Olympics so far (what’s the matter, never seen a hypocrite before?) but I’m not here to talk to you about sport. First of all I know next to nothing about why on earth kicking a ball into a net is so God-damn important, but I’m also terrible at playing it. What I am here for is to give you a little taste of the backdrop to this games.

The Science Of Doping

Doping is often seen as the dark side of sporting festivals, whether the problem is Eastern-Europeans pumping their women so full of testosterone that infertility becomes an issue, or whether we’re talking about Nick Delpopolo (US Judo competitor) eating hash brownies and ending up with more than just the munchies.

The more interesting science in terms of doping however, has been brought to the world’s attention once again by Italian race walker Alex Schwazer, who tested positive for EPO this year, and therefore will not be competing to maintain his position as world champion this summer.

EPO’s a very interesting substance; short for erythropoietin, this hormone stimulates the production of additional red blood cells (or erythrocyes) in our blood, adjusting for the availability of oxygen in the environment. For example, in some mountain tribes where atmospheric oxygen is low and the air is thin, more EPO is produced by the locals than the norm and their red blood cell count is much higher, allowing them to store more oxygen and therefore have an easier time living at higher altitudes.

Now, where this comes into play in the Olympics is the desire of an athlete to be able to rely on anaerobic respiration for longer (the type we use oxygen for); the more red blood cells the athlete has, the more oxygen he/she can store at a time, the longer they can run/swim/walk/cycle without building up the lactic acid that results from anaerobic respiration. No more cramps, or at least less cramps, for the athlete.

EPO is a naturally occurring hormone, as you might have guessed already, and everyone has varying levels of it in their blood. However, when the concentration of this hormone is abnormally high, it is much more likely that it has been planted in the athlete’s blood than that they have just been in a low oxygen environment or something similar. Athletes actually are more likely to have a high red blood cell count than the general population in any case, because they spend much more time depleting their oxygen supply, and so EPO will be produced so that they can go for longer without knackering up the body (as they say in London… or at least they do in Nottingham). 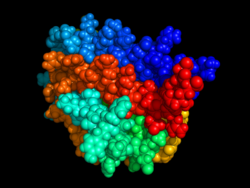 So when you see the athletes doing their thing, try to think about how amazing it is that their bodies make them capable of moving so fast, jumping so high, or so far, or whatever it is they excel at. Because it’s thanks to hormones like EPO that these amazing feats are possible; they make our bodies adaptable to changes in our lifestyle and environment, if only on a relatively small scale, and without that adaptability athletes would never be able to push themselves as far as they can for the glory of a world record, or for the chance to show the world what they, and by extension their country, are capable of.