Science Sunday: The Problem With Dinosaurs

I actually wrote this piece back in March as an entry into the wellcome science writing competition in association with The Observer newspaper. However, the site recently posted their shortlist of potential winners and I wasn’t among them, so now you get the pleasure of reading a post covered in a thin layer of dust. Regardless, enjoy the dinosaurian discussion!

A controversy set in stone

Throughout the animal kingdom there are many examples of creatures that change shape dramatically over time. Larval forms of insects appear worm-like, but are a distantly related class of creatures to earthworms, tapeworms and nematodes. The lobster has seven distinct primitive forms before it reaches its adult phase, each looking almost alien compared to the other, and jellyfish were once simple polyps.

But could these physiological shifts, occur as dramatically in vertebrates as they do in our spineless cousins? The question of whether or not dramatic changes in bone structure can take place within the development of a child to an adult, is a key point of contention in the paleontological community; the question of how many dinosaurs we’ve discovered are distinct species, and how many showcase the different stages of one life.

Let’s take a look at a prime example of this debate; the relatedness of Torosaurus and Triceratops; frilled, horned, beaked, four legged and bird-hipped, could they be one species? To answer that question we need to point our eyes to keystone of scientific discovery and debate –evidence; which has caused a flip flop of mainstream opinion in the past, the most recent study suggesting that the two organisms were indeed separate species.

And part of the reason for this media flip-flopping is the sensationalist angle of all this; journalists often want their piece to be the conclusion of the debate when opinions are still divided. Often times a debate is ‘finished’ when it is still ongoing and a debate is ‘created’ in a world where the facts are actually pretty firmly on one side.

But having discovered that significant changes in skull shape occurred in Tyrannosaurs and Pachycephalosaurs, it was not much of a stretch to suggest that Torosaurus and Triceratops; separated by Torosaurus’ larger, two-holed frill. And after analysing huge variations in the skull size compared to body size in Triceratops fossils, the question was raised of whether, by missing certain pieces, the long-gone ecology of these creatures was being misrepresented by the surviving remains.

Despite this apparent finality, as the media had described it, a study published just this year in Plos One found what appeared to be very old Triceratops skulls and very young Torosaurus skulls, an observation made by analysing the changes in skull structure with age.

Is this a wrench in the gear of this theory then, or a point still under contention?

Well, even if this were completely definitive, this debate is not simply contained within the Triceratops/Torosaurus discussion, there are also questions of Tyrannosaurs that could possibly be juveniles of the most famous dinosaur of all.

Is it possible that, as blurry as the line between species can be, Tyrannosaurus Rex could indeed be a fully-grown Nanotyrannus, and what of the recent discovery of feathered tyrannosaurs? Could it be that we still have vast amounts to learn about the taxonomy of ancient creatures?

There are many problems with making distinctions between creatures based purely on their phenotype that the world has come to know over the many years of fossil excavation. Certainly the molecular biology of dinosaurs is difficult to preserve, and for a while we had vastly different interpretations of the forms of creatures such as iguanadon; whose horn-like thumb was thought to exist on its face.

Only by putting the fossils into their temporal and geological contexts can we make the distinctions, say between false sabre-tooths and the sabre-toothed cats that excite the children within us so much. This haziness is part of why this issue of prehistoric classification is much less black and white than we might think; and unless we find many more examples of whole Triceratops families can we confirm ( or at least as much as you can confirm something in science) whether these creatures are separate from the similarly-appearing Torosaurus specimens. 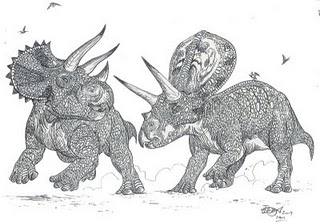 When you begin to focus in on the Nanotyrannus/Tyrannosaurus Rex debate however, there seems to be a further leaning towards one side of the argument since the discovery of the more complete Nanotyrannus, sweetly nicknamed ‘Jane’ in 2001. The similarities between this specimen and those of T-Rex persuaded some, through analysis of tooth structure and other physiological keys to the mystery, that ‘Jane’ was proof enough to confirm that Nanotyrannus was indeed the paleontological equivalent of ‘Chomper’ from The Land Before Time II (a film that truly rivals Jurassic Park as the greatest dinosaur flick of all time), despite ground firmly held by those who remain sceptical of this reclassification.

We are still resting on shaky ground regarding this issue, and while it may seem that one side is overruling the other, we would be foolish to ditch our scepticism and close our minds to the possibility of disconfirming evidence on either side.

Being Sick... In China