There’s a lot to be said for fantasy novels. They allow us to explore our world through another, in ways that might not be possible in a modern setting, and by borrowing the patriarchal world of Medieval times, we can use these stories as a lens to examine how people in the real world are affected by a world that is still male-dominated. I’m going to take a look at three examples of characters in George R. R. Martin’s series ‘A Song of Ice & Fire’ and how the patriarchy of Westeros affects them. So, spoiler alert for those who haven’t read all of the books. Don’t say I didn’t warn you. Since storming through ASOIAF this year I’ve become a little bit of a lurker on the forums over at westeros.org, and when the patriarchy topic was brought up, there was an interesting discussion, that unfortunately had to follow someone decrying the topic as inappropriate for the forum. Which, for a place that discussed battle strategies not long before, didn’t seem to make much sense. My suspicion is that there are still many people who do not believe that we exist in a patriarchal society, and that sexism is pretty much ‘fixed’. Well, as much as we’d all like that to be the case, we’re not there yet, and we still have a long way to go, but in Westeros to deny the fact that there is a patriarchal society in its very setting would be to have not paid any attention at all.

Some try to fight it, some fall into the status quo, some are unaware of its force until they are forced to confront it face-to-face. Let’s take a look at some case studies and see how it has defined three characters. 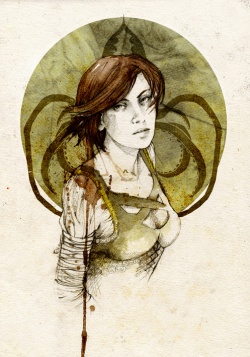 The daughter of Balon, the self-declared King of the Iron Islands and sister to Robb Stark’s BFF Theon, she makes it clear that a lot has changed for her over the years. To a childhood friend who wished to marry her, she reveals that she is disinterested, that she has become a warrior in her own right and is far from innocent. Her father wished for her to rule after him, believing Theon to be unworthy, despite the male-dominated laws of succession, and after Theon’s disappearance and Balon’s death she becomes the rightful heir. And yet the Iron Islands will not allow a woman to rule them, even one as capable as Asha, despite the wishes of their late King. Then, after she is forced to leave without the Kingdom her father promised her, the new King has her married off without her approval or even presence, a political move of repression, preventing her from using the only tool left to women to gain support – being married into a family.

Asha – like a couple of other characters in the series, rebels against the gender roles of her society, and chooses to live as a warrior, but is ultimately stripped of what she has earned due to her gender. In the modern world, people still have their ideas of what females should be, and women who defy these roles are sometimes ridiculed for merely expressing themselves. Asha was successful up to a point, but when it came to her heritage she was denied what is usually considered a man’s role, as, unfortunately, women still are in some workplaces.

Cersei is one of those characters that has explicitly decried the laws placed on her as a woman – feeling that were she only a male she would be as her brother Jaime is, a Knight with explicit power. Even as Queen of the Seven Kingdoms she is forced to rule through another as regent, although this is less to do with gender roles and more to do with the fact that she married into the royal family. She has taken the prejudices of the patriarchy inwards, believing women to be weak, and limits herself by these standards. She is forced to use her sexuality to get her way as a ‘woman’s weapon’. A lot of this goes back to her childhood, where she and her twin brother Jaime were identical until they began to be prepared for adult life. Suddenly, the two who has both been equals were forced to follow very different paths based on their genders, the strictness of their roles driven by the ruthlessness of their father, who planned to marry Cersei off to gain political favor and raise Jaime to be a warrior.

Cersei bitterly accepts the rules her society has laid out for women, unlike Asha who fights against those rules. She yearns to be able to have the privileges offered to a male in her situation but believes that she cannot have them and works from there, rather than taking the initiative to change them. She is a victim of a society that belittles women not only in that her options are reduced, but that she is convinced of the limits of her gender herself, and thus reinforces the ideas through her actions. 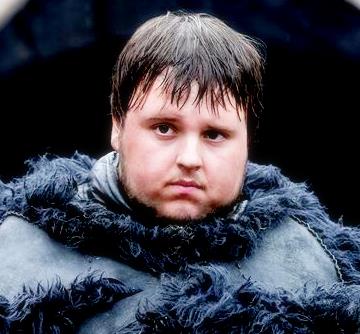 Lest you think the patriarchy only affects women, this is the initial example given on the aforementioned forum threat, and one I found very interesting. In male dominated societies, expectations are placed upon men as well, and this is no exception in Westeros. When Samwell fails to meet the ideals of manhood, he is given two options – leave to join the Night’s Watch and strip himself of his rights, or be killed. Westerosi men, especially noblemen, are expected to be adept in politics and war. Sam couldn’t even bear to watch a chicken die, he grew fat and he was bullied by the sons of other noblemen. His father could not accept Sam as he was because he didn’t fit his criteria of what a son might be. Similarly, today there is a standard of ‘manliness’ that is not only arbitrary but unfair to those who do not match it. When a society deems that women are to be a certain way and men to be another, it damns itself to exclude men who do not meet the gold standard and women of all stripes. Westeros, using medieval culture as an influence, may be a world of extremes, but we must not forget our world does not yet allow people to choose how they want to live without judgement, and we could do well to try and set an example so that we keep moving in this direction, lest we wish standards of male superiority and female inferiority to remain alive in our cultures.

Suspension of Disbelief: The Night Circus