How To Write Songs That Aren’t Horribly Sexist: Lesson 1

Recently I’ve been getting back into playing and writing music as a means to blow off steam, flex my creative muscles and do something productive that doesn’t count towards my degree (like this something I like to do). This got me thinking about the role of music in out lives, and as a reflection of our society. I was momentarily pleased on reflection, then I remembered that ‘Rack City’ exists and that moment passed. As someone who has been writing songs for years (albeit ones that no one should have the displeasure to hear), I thought I could help some music professionals out, and give them a guide on how to write songs that aren’t full of horribly sexist clichés. What follows is my first attempt.

For reference, this is how to fail this class: 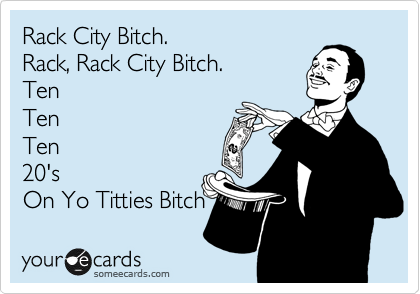 I think the reasons for the failure speak for themselves.

A passing student may produce any number of things, with a target to write a song that doesn’t reduce over 50 percent of the population to shelves in which you keep your money. You have wallets for that kind of thing, and if you have too much money there are always charities. If by the end you are still objectifying women, I suggest you find an alternative career, perhaps at some MRA helpline or something.

For most people (I hope), this goes without saying. Men, women and everything in between are all people, so treat them as such. You can tell them what you think about them I suppose, but not in a way that reduces them to something less than equal to you. For example, you’re not a horrible person if you, like Sir Mixalot, like big butts, especially if you cannot lie, because then you can’t help but tell people about it and people should accommodate for your disability. However, if you equate a woman to just her behind, or her breasts for that matter, as in my previous example, then you’ve stripped the subject of your writing of a personality and made them an object in your song rather than a character in your three minute poem with drums.

In my first example, and the one that inspired me to write this, Tyga only refers to the woman in his song as ‘bitch’, a term I don’t think she would appreciate, and though the song is essentially about her, the only thing Tyga seems to think we need to know about her is that he’s putting money on her breasts. Though his intentions are apparently to please her, he manages to reduce her to an object. As a counter example, in Jonathan Coulton’s ‘Want You Gone’, from Portal 2, the intention of the character Jonathan is speaking for is to get rid of the female subject of the song because killing her is too difficult. Clearly the intentions of the narrator are negative towards her, and yet she is not an object, she has a personality and the narrator is reacting to it, rather than focusing on secondary sexual characteristics.

One way to check if you’re being horribly sexist is to flip the focus of the story around. If your song equates to someone just staring at a wobbling penis, then you’ve probably written a really awful song that should never be released. Case and point, this is basically what you get if you switch the kind of songs I’m talking about around:

One thing to keep in mind here is that the music industry and its employees do not screen for this. Like most businesses, they buy what they think they can sell and don’t care for taste, class or discrimination (unless they think they’re going to get sued if they try and sell a product), hence why some really awful songs make millions. So take note, just because your record producer doesn’t care, doesn’t mean that it’s not awful.

A whole-brain activity map, and the Obama administration

Doctor Who is being played by a woman; Sci-Fi ruined forever

We all need a little Faith

Investing in Women for Women’s Day