Hell Ain’t a Bad Place to Be

So apparently there’s a new Dan Brown book out today. I know next to nothing about this, but it does, apparently, have to do with hell. Now I like the idea of eternal suffering and despair just as much (or in this case, little) as the next guy, but while I once believed in a heaven, I could never bring myself to believe in a hell. Perhaps that’s one of the reasons I find belief in it so baffling, and one of the reasons why I want to talk about that particular underworld today.

The idea of an afterlife, as unlikely as it is, has a certain allure. Most of us don’t want to die (cheers for that, evolution), and the idea that our life is but a brief glimpse of a greater version of itself as so compelling that its a central tenant of most of the major world religions and even lives on in the new age ‘greater levels of consciousness’ religion that doesn’t believe it’s a religion.

Leave it to humans to find a really good idea and make it into something awful. As if the idea of being put to death wasn’t horrible enough, our species found a new way to scare the crap out of us all by persuading us that if we didn’t conform to a certain set of moral rules we’d spend an infinity being tortured and punished. The fact that, in St. Paul, the Bible has one of the archetypal redemption stories only makes the idea of burning forever for having homosexual intercourse ironic. 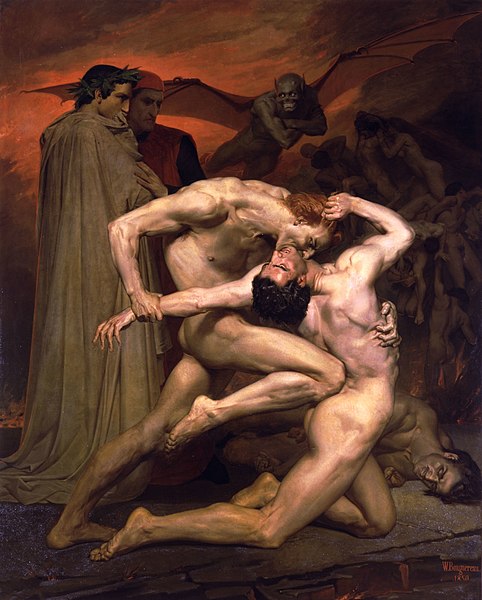 Naturally, hell has sort of faded into the background these days. There are fundamentalists, yes, but it seems that all in all, belief in the eternal suffering of sinners isn’t as ubiquitous as it once was.

The afterlife concept has often been pictured with a sinister side, however. Anyone remember Anubis weighing the hearts of the recently deceased against a feather? And we seem to enjoy a horror story just as much as we like a redemption story, but these days religion seems to be growing into more of a notion of comfort and safety rather than a way to understand the world. In such a world, the dark side of reality doesn’t need to be reflected in religion. With the Christian God, who has grown from a figure to be feared to a fear to be loved, from a lord to a father (though both names are still used), the existence of a hell in a world where he exists is becoming increasingly inconsistent with the way he is explained and believed in.

Hell is the monster under the bed, the dark creature watching you though you know full well you’ll never see it. The monster story that became so much more. In some circles, the threat of it is still used to keep the faithful faithful, but surely, such a fear isn’t a good tool for inspiring faith, because the faith must already be there for the fear to work? A quick google couldn’t help me support or denounce that idea, unfortunately, but even if it isn’t unproductive, it’s an inherently dishonest way of tricking people into a cause that’s supposed to be ‘righteous’. And in my opinion, the fear of death without an afterlife is fear enough to scare someone into belief.