Unless you live under a rock that doesn’t have wifi for some reason, you’ve seen the scientific musical masterpiece that is Bohemian Gravity. Perhaps, after watching that glorious mix of harmonies and science, you were left admiring the beauty of the song, but wondering what, exactly, it was about. Well, after a long day reading Wikipedia, I have come to tell you that I understand it! Mostly. And I shall do my best to explain it to you so that you understand it too!

Disclaimer: I am not a string theorist. This should be evident by the end of this post.

Infinities will make you cry, unless you can renormalize your model:

Ever since the early twentieth century, physicists have been looking for a way to unite the four fundamental forces (gravity, electromagnetism, the strong nuclear force, and the weak nuclear force) into one universal force, creating a theory of everything. For the most part, they’ve succeeded. They’ve managed to unite every theory except gravity, developing a theory called quantum chromodynamics.

However, there are still problems. One of the biggest hurdles physicists have had to overcome deals with momentum. In quantum physics, momentum is related to spin, which is a quantity that particles have that means, well. Perhaps this will explain how I view spin. Anywho, spin is related to a lot of things, including momentum. And it turns out that when particles approach the speed of light, their momentum increases to infinity, which can be a problem depending on what the spin is.

For particles with a spin less than one, such as protons, neutrons, electrons, neutrinos, and quarks, this infinite momentum isn’t a problem at all. However, for particles with spin 1, such as photons, it becomes a bit of a problem. Basically, we start getting infinities pretty much everywhere, including places they have no business being. To deal with this, physicists use a technique called renormalization. Basically, we use a bunch of sneaky mathematical tricks to rewrite the equations in a way that doesn’t plague us with infinities. It’s fairly easy to renormalize photons (which carry the electromagnetic force) but much harder for gluons (weak force) and W and Z bosons (strong force). It took us thirty years, but we eventually did it. We renormalized all the forces, and we came up with quantum chromodynamics.

The graviton can be thought of as a field, but these infinities are real
In a many-body loop diagram, our results diverge no matter what we do:

But what about gravity? Why didn’t we renormalize gravity? Well, the answer is because the graviton, the particle that carries the force of gravity, doesn’t have a spin of 1. It has a spin of 2. Yeah. So that’s a big problem, because it means that gravity isn’t just harder to renormalize, it means gravity can’t be renormalized at all. It’s a nonrenormalizable force.

That’s not to say we didn’t try. We did. For decades. We developed all kinds of crazy theories, and invented at least one major branch of mathematics in the process. But ultimately, we failed. Gravity just isn’t renormalizable.

I see extended 1-D objects with no mass:

To solve this problem, physicists hypothesized the existence of massless strings, which are very small one-demensional objects that just have units of length. These strings, on the atomic scale, become protons, neutrons, and electrons, as well as photons, gluons, bosons, and even gravitons. One of the consequences of string theory is that it eliminates the momentum problem, and thus the need to renormalize at all. So finally, we can combine gravity with the other three forces to make a unified theory of everything. Hooray!

So how do strings become particles like quarks, electrons, photons, and gravitons? The answer lies in their vibrations. Strings can vibrate in different ways, depending on their properties. Each of the different vibrations produces what we see, at the atomic scale, as a particle. Strings that vibrate at different frequencies become different particles with different energies.

Now we need ten dimensions and I’ll tell you why:

Things get a little hand-wavy here, because this is the part I don’t really understand. Maybe someone else could explain it in the comments?

Anyway. One of the consequences of string theory is that we can have negative norms. Positive norms are a good thing, but negative ones are bad, and make any sort of quantum mechanical calculations impossible. So what’s a norm? Honestly, I wish I knew. In trying to figure out what a norm was, I learned that these negative norms are called ghosts, which is unfortunate, because I got results that were completely different from what I was expecting when I googled “string theory ghosts.” In retrospect, that should have been obvious.

So to get down to 4D we compactify:

Superstrings of type I, IIa and IIb
Heterotic O and Heterotic E:

This is where it gets really weird, as if it wasn’t already. It turns out that there’s not just one string theory. There are five. There are some subtle differences between them. For instance, type I is the only type to have open strings. They all give the right answers, and they all could potentially be the correct theory of everything, but they tend to differ in terms of some constants and basic string properties.

All are one through S and T duality
Thank you Ed Witten for that superstring revolution and your new M-theory: 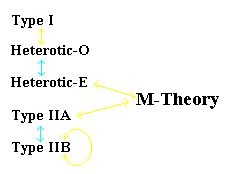 So remember like, five seconds ago when I said there were five different string theories? That’s not exactly true. Physics has this concept called duality, where the same physical system can be described by two different theories. Essentially, if two different theories have a duality, they are interchangeable, and are really different aspects of the same theory. We see this in physics all the time, with electricity and magnetism, and with the wave nature and the particle nature of light, to name a few.

So we have two groups of string theories: type IIA/IIB, and type I/HO/HE. But it turns out we can go one further. In 1995, a physicist named Ed Witten introduced what he called M-Theory. What’s the ‘M’ stand for, you might ask? Nobody knows. Seriously.

This did two things for string theory. First, it increased the necessary amount of dimensions from ten to eleven. Secondly, it provided a level of S duality between the two types of string theory. This means that M-Theory creates a single unified string theory.

Is string theory right? Is it just fantasy?
Caught in the landscape, out of touch with reality:

So we’re done, right? Physics has finally solved everything. We can all quit our day jobs and go join the circus. Well, not so fast. See, string theory has this tiny problem in that none of it has been proven yet. Most of the interactions between strings happen on extremely small scales. In order to observe them on even the atomic scale, we’d need enormous amounts of energy. These are energy levels that we can’t even produce in the LHC, so we have no chance to test any of the predictions of string theory anytime soon.

This is extremely unfortunate, because for all of the beauty and (relative) simplicity that string theory offers, it will likely continue to remain only a hypothesis for the foreseeable future. Right now, string theory doesn’t even have many useful physical applications. Currently, all it does is make some calculations easier and give mathematicians nightmares, which I suppose is still a good thing.

Molecules and atoms, light and energy
Time and space and matter, all from one united
Theory:

If string theory is right, however, it has enormous implications for how our universe works. In the bigger picture, it means that everything is connected. Not in the woo-ish spiritual sense, of course, but in the more literal sense. Every force in the universe, no matter how different, is a manifestation of a single force. Every form of energy in the universe is all fundamentally the same type of energy. Every type of particle is the same particle. And when you get right down to it, there are no real differences between force and energy and matter and even empty space. Everything, from the light shining on you, to the electrical currents running through whatever device you’re reading this on, to the protons and neutrons that make up the atoms in your body, are all made up of the same tiny vibrating strings. And that’s beautiful.

Awesome Sauce Music Friday! The Way that You Write, So Offensive and Trite Edition

Avery is a 23 year old recent college graduate, and when he's not busy wishing he didn't major in physics, he enjoys go, juggling, and music.
You can find him on his blog, Google+, or on Twitter as @PhysicallyAvery.